Apple, Starbucks and the Jobs Report – 5 Things You Must Know

Here are five things you must know for Friday, Nov. 3:

1. — U.S. stock futures were pointing to solid gains for Wall Street on Friday, Nov. 3, after Apple Inc. ( AAPL) reported stronger-than-expected earnings and guidance and as investors awaited the release of the U.S. jobs report for October.
Economists surveyed by FactSet expect the U.S. to have added 308,000 jobs last month with the unemployment rate remaining steady at 4.2%.
The jobs report will be released at 8:30 a.m. ET. The economic calendar in the U.S. on Friday also includes International Trade for September at 8:30 a.m., and Factory Orders for September at 10 a.m.
Earnings reports are expected Friday from Madison Square Garden Co. ( MSG) , Revlon Inc. ( REV) , E. W. Scripps Co. ( SSP) and Sotheby’s Inc. ( BID) .
U.S. stocks on Thursday, Nov. 2, finished mixed but the Dow Jones Industrial Average secured a fresh record close after Donald Trump made no waves by picking Federal Reserve Gov. Jerome Powell as his nominee to become the next chair of the U.S. central bank.
Stocks had a somewhat muted reaction to the rollout of proposed major tax-reform changes by House Republicans, changes designed to permanently cut the corporate tax rate and, they say, lift some of the tax burden off of the middle class.
2. — Apple Inc. ( AAPL)  was rising 3.1% in premarket trading on Friday after the iPhone maker reported blowout fiscal fourth-quarter earnings and gave upbeat guidance for the coming quarter, taming any fears that the company might see underwhelming iPhone sales.

Shares of Apple were trading at $173.36 in premarket trading, pushing the tech giant’s market cap even closer to crossing the $900 billion threshold. The stock has risen more than 45% so far in 2017.

On the company’s conference call following the release of the results on Thursday, CEO Tim Cook said Apple was “bullish’ on the holiday season.

“This is going to be the best holiday season yet,” Cook said. 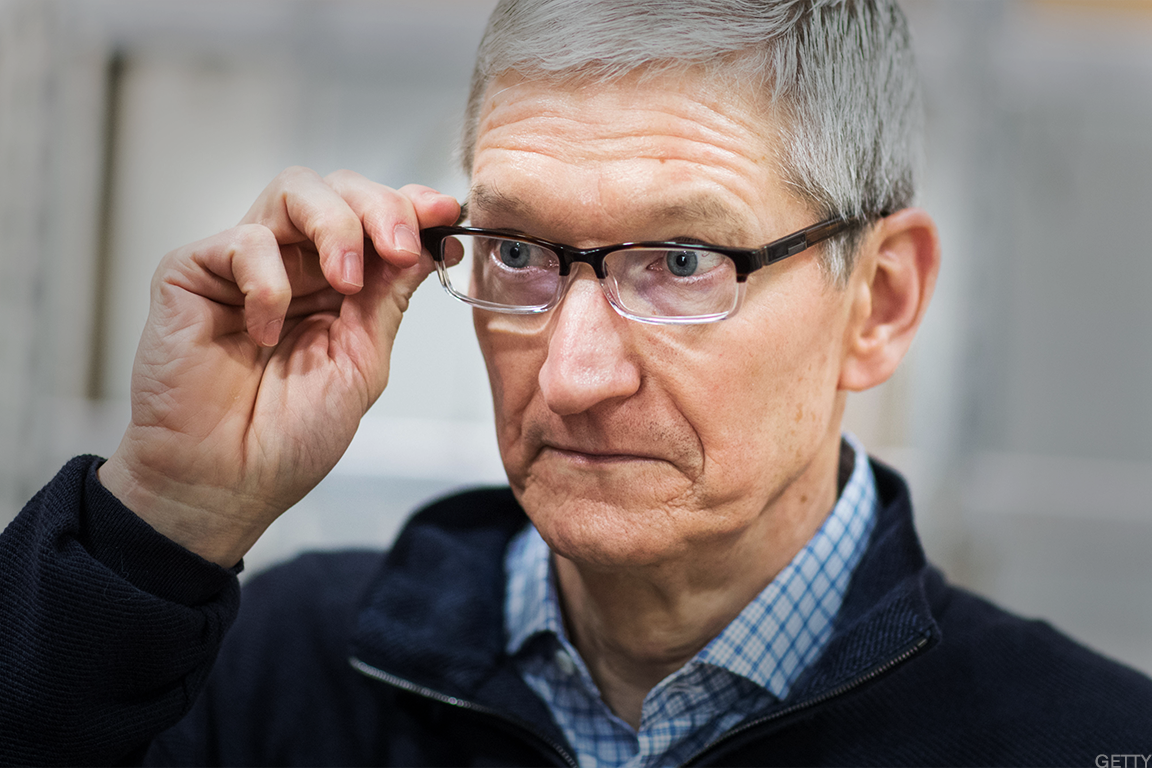 For the seasonally big December quarter, Apple guided for revenue of $84 billion to $87 billion, implying 9% growth at the midpoint and in-line with analysts’ estimates of $85.2 billion.

“Apple is selling more products, increasing revenues and making more money off services than ever before, and with the iPhone X still not shipped out, we believe there is still more to come from the company, said Cramer and the AAP team.

The company’s newest smartphone — the iPhone X — went on sale in stores around the world on Friday. The phone is priced at $1,000.

The company also said it agreed to sell its Tazo tea brand to Unilever (UL) for $348 million.

4. — T-Mobile US Inc. ( TMUS) and Sprint Corp. ( S) are working to save their proposed merger, people familiar with the matter told The Wall Street Journal, just days after Sprint Chairman Masayoshi Son appeared to call off the talks.

T-Mobile made a revised offer, which Sprint is considering, some of the people said. Terms of the new offer were unclear. The two sides could reach a deal within weeks, the people said, but the two companies could still fail to agree on deal terms.

T-Mobile CEO John Legere spoke with Sprint CEO Marcelo Claure on Wednesday, Nov. 1, after a T-Mobile board meeting in New York where directors agreed to renew their overtures to Sprint to keep the deal alive, one of the people told the Journal.

5. — A customer support worker at Twitter Inc. ( TWTR) , who was on his or her last day on the job, deactivated Donald Trump’s account for a few minutes on Thursday evening, the social media company said.

Shortly before 7 p.m. Thursday, social media reports surfaced that the president’s personal account, @RealDonaldTrump, was unavailable, providing the error message that the user “does not exist,” the Associated Press reported. The account was restored by 7:03 p.m.

Twitter took responsibility for the outage. In a tweeted statement, the company said Trump’s account was “inadvertently deactivated due to human error” by one of its employees. The account was unreachable for 11 minutes.

How GOP Tax Bill Can Hurt Your Retirement Investments

Stocks Haven't Progressed Much in Past Two Weeks

Stocks Haven't Progressed Much in Past Two Weeks